What is NIHONBUYO - Mai and Odori

NIHONBUYO is dance based on the techniques of Kabuki dance. Its main characteristic is that it developed from the male-only Kabuki theatre, and has incorporated dance by female performers. It also spread when it became popular to take classes to learn NIHONBUYO, and it has been a supporting pillar of Japanese traditional culture.

NIHONBUYO has three elements: odori, mai, and shigusa. Odori emphasizes the element of rhythm and moving to it, and mai is soft, with internal expression at its base.

In Modern Japan, NIHONBUYO became independent from Kabuki, and many professional NIHONBUYO performers emerged and established active careers. It captured the fascination of many people, and created a surge in traditional arts. With a mastery that has been achieved over time, and a refinement that extends to its limits, NIHONBUYO can be described as the essence of traditional art.

The beginning of mai and odori

The origin of mai and odori is said to be in mythical times, described in a story of the sun goddess Amaterasu, who goes into hiding in a cave, plunging the world into darkness. The goddess of dawn Ame-no-Uzume dances in a divine trance to entice the sun goddess out of the cave, and return light to the world. Mai and odori thus began as an offering to god, a form of prayer, and an early means of communication with god. From there it developed into different art forms, but all have at their basis a reverence for god.

The evolution of Kabuki dance 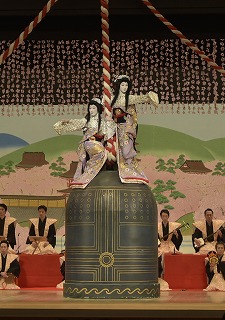 NIHONBUYO was born from Kabuki. The basic form of today’s Kabuki was established in the Genroku period (1688~1704). At the time, theatre was for male actors, and dance was for male actors who specialized in female roles (onnagata). Because of this, Kabuki dance was focused on showing the beauty of the onnagata rather than on telling a story. Later, with developments in music, “dance drama” (buyo geki) with a more profound, dramatic element was born, and actors in male roles also had leading roles in dance pieces. These new pieces also widened the range of roles for onnagata, who had been playing either courtesans or princesses, with new dance pieces featuring young girls. This later developed further into dances that depicted everyday life. Finally, in the Bakumatsu period (1853~1868), many refined pieces were created based on the Noh and Kyogen theatre.

Separation from Kabuki and becoming and independent art form 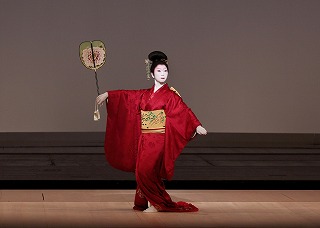 Towards the end of the Meiji period (1868~1912), the author and prominent literary figure Shoyo Tsubouchi proposed a major change in Japanese theatre. He encouraged the creation of dance drama (buyo geki) as a form of musical drama to represent a new era in Japanese history that had arrived with the Meiji Restoration. A new term “buyo” was coined to replace “buto”, which had been a Japanese translation of the word “dance”. This became a starting point for a movement in the Taisho period (1912~1926) to create new works of dance (the Sin-buyo Movement) that were different from the classic repertoire, and many female NIHONBUYO performers were active. NIHONBUYO became separate from its parent, Kabuki, and developed beyond an art form that was popular for people to learn, into an independent performance art for the public stage. During the Showa period (1926~1989), children from ordinary homes also aspired to become professional NIHONBUYO performers, and NIHONBUYO flourished. The accomplishments of geisha were also significant in contributing to this success.

Since the Taisho period, the content of dances has also absorbed elements from many other performing arts from the influence of ballet and modern theater, to incorporating expressions from folk performance art as well as new forms such as group dancing. In this way, it has continued to grow, exploring how it can interact with and be relevant to each period in time.

The beauty of dancing in kimono 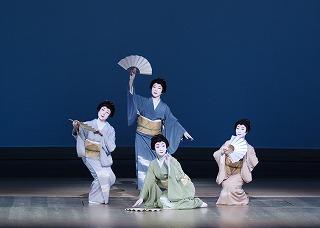 What immediately stands out in NIHONBUYO is the beauty of gestures and movements (shigusa) that comes from wearing a kimono. It is an experience of the invisible essence of Japanese kokoro (heart) that is in for example the shape, decorum, modesty, and expression of gratitude, that is based in the way a person carries themselves when wearing a kimono. The line of a straight back, movements that are centered, the graceful, circular gestures, and the sleeve that follows the lines of these movements, or a quick flutter of the hem, are the way the kimono moves together with the body, and where Japanese beauty expands. 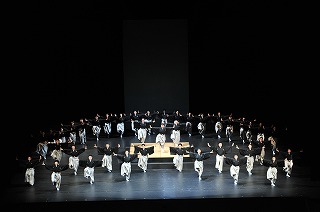 Using an object, for example a fan, to dance is a characteristic of Japanese performing arts. These objects can represent a divine spirit, and at times, it is thought that the act of holding the object can make a person qualified to perform a dance. In Kabuki, the fan can be replaced by other objects such as a round fan (uchiwa) or drum, spear or sword, a willow or cherry branch, that are held in the hand while dancing. Te-odori is a type of dance in which the dancer does not hold an object. Instead, they move their palm in fluttering motions as they dance.

Becoming the wind, a tree, a bird, and… 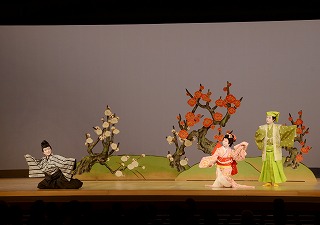 A distinguishing characteristic of NIHONBUYO is the description of scenery. In addition to expressing a role, a dancer becomes a part of nature and describes scenery, such as the blowing wind, a tree, the moon over a mountain – an element that is rarely seen in other forms of dance such as ballet or flamenco. Nature and the weather are described both directly and indirectly, for example using the fan to depict crashing waves, or the kimono sleeve to keep off falling snow. This is also where the long tradition of the Japanese spirit of “mitate” (using something to express an object or a situation) is alive.

Another, crucial characteristic is the expression of the sleeve. The sleeve has long been associated with expressing feelings of love such as in legends and in waka poetry, and NIHONBUYO has developed this further, using the sleeve in a variety of ways to colorfully show feelings of love, for example through holding the sleeve or hiding the face with the sleeve.

Men and women of all ages, samurai, farmers, artisans, merchants, and animals: dancing many roles

NIHONBUYO involves performing many roles. One day a lovely girl, on another day a brave warrior, an elderly woman, a fox – the range of a NIHONBUYO performer is wide. A performer sometimes dances several roles within one dance, and NIHONBUYO requires a multi-faceted ability of expression, and a high level of technical strength. Taking on the role of multiple characters, one after another, within one dance is also specific to NIHONBUYO, and is an extension of the idea of henge-shin, where a Buddha or bodhisattva assumes an alternate form to lead a living being to enlightenment, and Japanese spirituality. 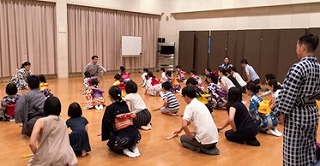 Classes that are open to everyone, of any age!

Unlike many traditional performing arts, NIHONBUYO can be learned by men and women, with the possibility of performing on stage, and with the right training, of becoming a professional dancer, and this sets NIHONBUYO apart from many other performing arts. During the Edo period (1603~1868), it was common to receive basic education at terakoya temple schools and learn dance and music as a form of higher education. Knowledge of traditional dance and music acquired through taking classes continues be regarded as an indication of a highly cultivated person. Its appeal also lies in having no age limit for when to start or how long to continue taking classes, and a person can continue to engage and learn at their own pace.

With dedication in studying NIHONBUYO, students can reach the “natori” level, and earn a professional name. More training leads to the “shihan” level, with the qualification to become a teacher of NIHONBUYO (the stages of training and the name of the qualification differs depending on the school). Teachers who have earned this qualification have started their own classes to teach NIHONBUYO in their local areas, and are working to spread NIHONBUYO. They are bringing people in touch with the fascinating qualities of NIHONBUYO through performances for their students to show what they have learned, organizing their own performances, and participating in performances organized by the Japanese Classical Dance Association and the National Theatre, as well as by local governments and at schools to spread NIHONBUYO. 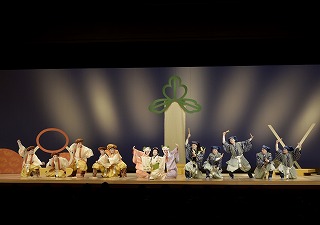 Begin with what you feel – for beginners

When you find music that you like, for example, and there is a phrase that you particularly like, or the lyrics appeal to you, or when you see a wonderful dance performance, and find yourself dancing, or enjoy the pantomime-like parts of the dance – in the same way, you can begin with just a little bit of curiosity, and then try watching and listening again.

Something that has true quality has the power to inspire even when the person who sees it has no background knowledge. “I don’t know what it is, but it’s great!” There is buyo that will make you feel that way. So, please tune your ears to the music, turn your eyes towards the movements, and just feel with your five senses the world created when the music and physical movements interweave with each other. 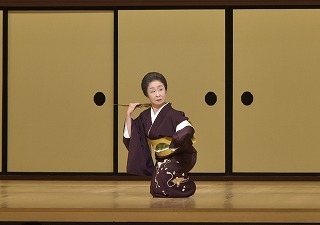 NIHONBUYO is usually accompanied by lyrics (verse), and has an indescribable charm that comes from the words, music, and dance overlapping and merging together, and knowing these aspects adds to the enjoyment of NIHONBUYO. It is a skillful arrangement that is based on ancient to modern literature, such as waka poetry and stories, and on literary knowledge of Noh and Kyogen. Even if you have no knowledge at the beginning, acquiring knowledge of literature through dance, and seeing expressions that are connected to it, is also what makes NIHONBUYO interesting.